As October ends and Halloween approaches, we would like to invite you on a trip to: Castle Rock. This has to be one of the scariest and spookiest literary places. Why? Because Stephen King has made it so! And if you are wondering about Castle Rock, this is a fictional town that has served as the set for several of Stephen King’s novels and short stories. In this episode, we will take you on a spooky tour of the fictional town through some of King's books set in Castle Rock. 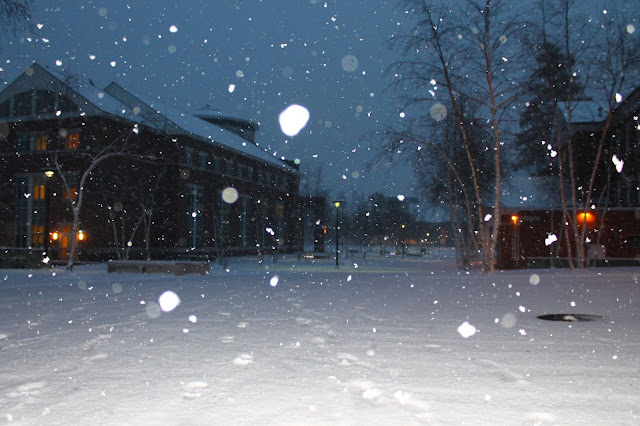 Photo by Alex Teplitz
📗 The Dead Zone
In The Dead Zone, we meet, George Bannerman, who is the sheriff of the town, as he tries to apprehend the Castle Rock Strangler, a serial killer at large in the town. In order to solve the case, sheriff Bannerman seeks the aid of Johnny Smith. And who is Jonny Smith? Well, listen to our Six-Word Review: Clairvoyant man after a five-year coma.
📗 Cujo

The cases on George Bannerman's desk keep piling up, I guess that is an occupational hazard for the sheriff of Castle Rock. We can blame Stephen King for it. Here we meet sheriff George Bannerman again, as he organizes the search for a missing mother and son dyad. The son, Tad Trenton, is haunted by a ghost who lives in his closet. This ghost is no other than the spirit of the serial killer we had met before in The Dead Zone in the same town of Castle Rock. But the nightmares for poor Tad Trenton do not end with the ghost in the closet, since as sheriff Bannerman search for him and his mother, they are both trapped by a two-hundred pound rabid Saint-Bernard named…Cujo.

Reading this novel will not give you an appetite, quite the contrary. But when, or if, you recover from reading Cujo and brave to hear the name again, you can recreate a specialty sandwich named after this dog that used to be served at the (now closed) The House of Q in Sioux City, Iowa. The Cujo, which used to be the name of the sandwich, was a hot dog (yep!) topped with chopped onion rings, cheese, and baked beans. 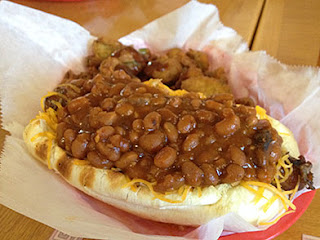 The Cujo Sandwish. Image from Sioux City Now
📗 The Body
In this book, a boy, Ray Brower, was fatally hit by a train, and a group of four young friends set up to  search for his body. Among the four friends was Gordie Lachance, who tells the story in the present as an adult who is an author of horror books (does he reminds you of anyone?). Gordie and his other three friends are bullied and tormented by a gang led by John Merrill, alias “Ace”. The quest for the body of Ray Brower puts Gordie and his friends face-to-face with cruelty and forces them to shed their innocence. But it also permits the creation of great bonds of friendship, which is why the book is recommended bibliotherapy if you are in the mood to celebrate friends.
Stand By Me is a movie from 1986 adapted from the book by Stephen King. Stand By Me is directed by Rob Reiner and it stars Wil Wheaton, Jerry O'Connell, River Phoenix, and Corey Feldman as the four young friends.
📗 The Dark Half
In The Dark Half, some time has elapsed since the books we have mentioned, and there is a new sheriff in town: Alan Pangborn. Alan is married to Annie and they have two kids and he is in charge of solving a series of disturbing crimes happening in Castle Rock, where else?. The evidence found at the crime scenes as well as the connection with the victims, all point to Thad Beaumont as the prime subject. When he was a young child, Thad used to have hallucinations that were announced by a cacophony of sparrows and the hallucinations went away after a very strange thing, no spoilers, was removed from his brain. Thad is  now a writer, who uses the pseudonym “George Stark” for some of his novels. Thad later kills him off his pseudonym, but, and here is more spookiness: the pseudonym refuses to die and he wants to keep “writing”. So, the sparrows are back!
We have chosen the 1990 Mass Market Paperback edition of The Dark Half by Signet for our Cover Gallery this week. First, it is a cover in a distinctive 90s style, and second it is extremely creepy. It portraits two sparrows in profile with their beaks touching, and seen from afar, the two eyes of the birds in profile are part of a set of spine-chilling eyes intently looking at the reader. 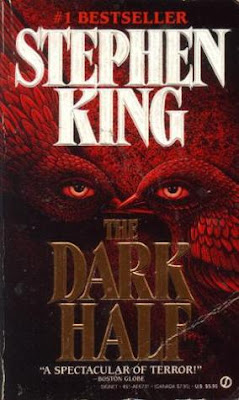 1990 Mass Market Paperback by Signet
And speaking of birds, covers, and other things this book has inspired. We have found  dragonrebound.com, the website of an artist who purchases first editions of his favorite books and works with book binders and artists to rebind the books in unique ways that ties to the story. The website has done a rebinding of The Dark Half that included quarter leather binding in black and white with birds, a slate cover box made to resemble George Stark’s gravestone, floating feathers endpapers, and engraved wood blocks in the shape of a headstone. Oh, they have another formidable one for Cujo! 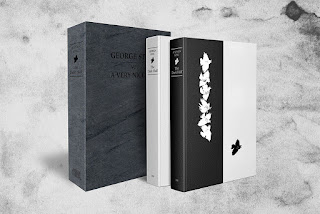 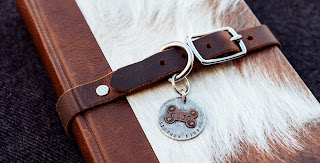 Rebound editions of The Dark Half and Cujo from DragonRebound.com
📗 Needful Things

In Needful Things we reencounter two residents of Castle Rock, Alan Pangborn (The Dark Half) and John “Ace” Merrill (The Body). Pangborn is now a widower and Ace is the right-hand man of Leland Gaunt. Gaunt is the owner of Needful Things, a store claiming to have any object its patrons most desire. As payment, Gaunt requests his costumers to play a practical joke on someone. These practical jokes seem innocent, but they start spiraling out of control, leaving Sheriff Pangborn to deal with the increasingly violent behavior of the residents of Castle Rock.

We could not find a storefront for Needful Things, thankfully! But we did find a souvenir online. For those fans of Stephen King and Needful Things, particularly Nemons sells a t-shirt with a vintage shop logo inspired by the store in the novel set in Castle Rock. 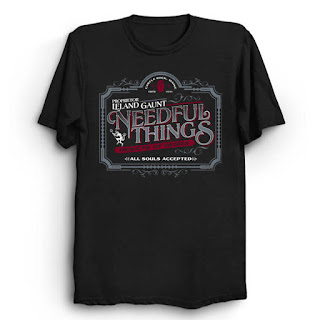 Shirt with vintage shop logo inspired by Needful Things from Nemons
For readers who would like to visit the store fronts that might have inspired Stephen King’s Needful Things, Storymaps have created a map placing this location at the downtown shops in Lisbon Falls, Maine. Lisbon Falls is the town that many believe to have inspired Castle Rock, and the map created by Storymaps certainly includes other locations in Lisbon Falls that may have served as the inspiration for other places in Castle Rock. 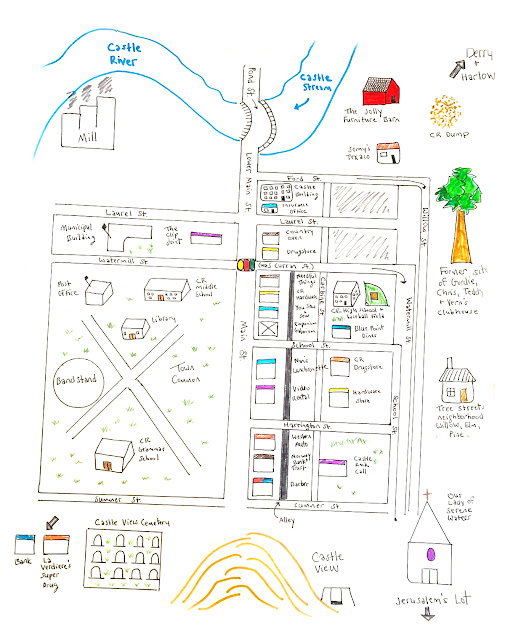 Map of Lisbon Falls (Castle Rock) created by Storymaps
If you happen to visit Lisbon Falls, or if you read a lot of the books set in Castle Rock, you might want to sport a europlate decal magnet of the fictional town that we have found from Evelyn Montgomery. 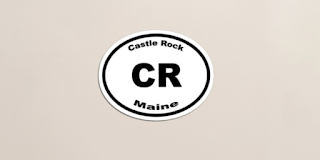 Castle Rock decal magnet by Evelyn Montgomery
For this week’s Book vs. Book we have selected two short stories set in Castle Rock. Both of these stories appear in the collection Skeleton Crew.
📗 Mrs. Todd Shortcut
In this short story, Ophelia Todd, another resident of Castle Rock, has found wormholes by folding maps in ways that shortens the distance between the two points she is navigating to and from. Mrs. Todd is obsessed with this shortcuts, but one day, she gets caught in one of them.
📗 Gramma
In Gramma, a young boy is charged to stay at home and take care of his bedridden grandmother. While he is fulfilling his duty, he checks on her and confirms she has died. But as he is deciding how to proceed with this turn of events, certain things start happening that shed doubt on his previous assumption that grandma might have passed.
We have chosen another horror book by Stephen King set on the town of Castle Rock for our GuessWork this week so close to Halloween. See if you can guess the title from its first line (containing a huge giveaway).
Stephen King is a native of Durham, Maine, which has served as the inspiration for some of his other fictional settings. And how is this for another literary connection: Durham's name is taken from the fictional mountain fort in Lord of the Flies, another book considered to be among the spookiest ones ever.
Some of the connections among the characters and the books we discussed were taken from the cool infographic about The Stephen King universe created by tessigirl 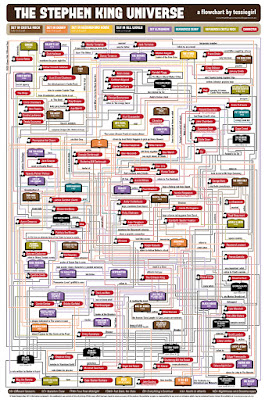 To buy books covered in this episode, visit our TBR Bundles